You are here: Fishing Report 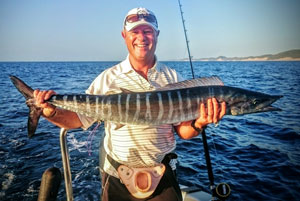 There are a few couta around if you go up past Island Rock and further. There are also lots of bigger size yellowfin tuna around the canyons and weights are between 17 –22kg, a good fight on light tackle. There were also a few wahoo around lately. Weather has been quite good with water temperatures of around 24-25 degrees. 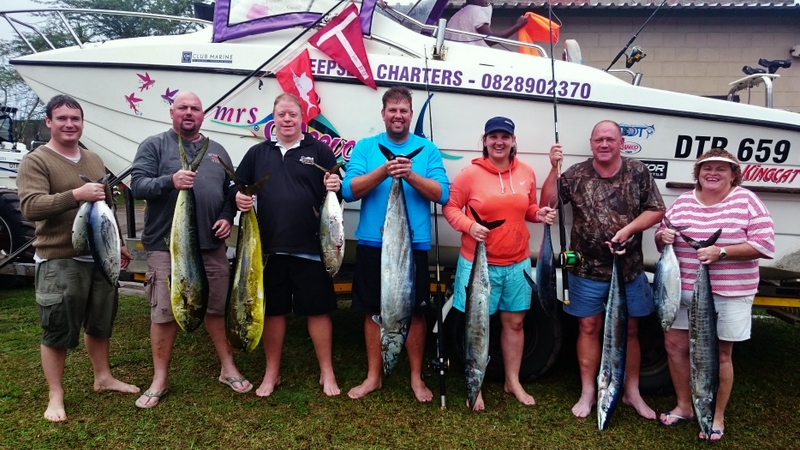 Fishing was abnormally good during the previous week from last Saturday till yesterday. There are a lot of gamefish species around like wahoo, couta, queen mackerel, dorado, sailfish, yellowfin tuna, queenfish, kawakawa, skipjack, prodical son as well as small marlin. If weather permits it is a good time out on the ocean with lots of whales, dolphin and sharks. 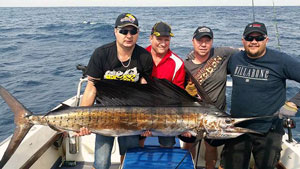 This week there were a lot of yellowfin tuna caught, a sailfish released and a few couta, wahoo, prodigal son and queen mackerel. There are plenty of queen mackerel around at this stage and the sailfish are quite busy as well. In the past week there were also a few marlin catches. Look like we are going to have a great fishing season ahead. 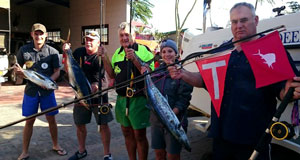 Fishing at the moment is okay, some nice yellowfin tuna and quite a few sailfish around 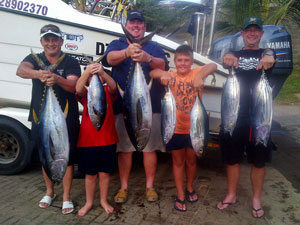 There are no fireworks with the fishing at the moment, few couta, some nice yellowfin tuna, lots of skipjack tuna and still a few marlin around.
We are getting fish but every day has it’s own way, some days not too bad, others dead quiet and the sharks take their cut as well. 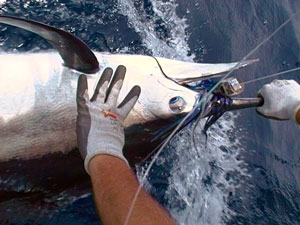 The fishing is quite good at the moment, lots of larger yellowfin tuna approx 15-20kg, dorado, marlin and couta.
Johan hooked a small black marlin on light tackle today and managed to release it safely again. I got two nice yellowfin, a dorado and skipjack tuna. 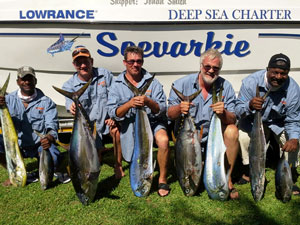 We only went to sea last weekend and the fishing was quite good. We were trying for marlin with live bait but were not lucky but there were quite a lot of gamefish around. Bigger yellowfin tuna approx 15kg, smaller ones, quite a lot of Dorado and a few couta were caught on the Seevarkies. 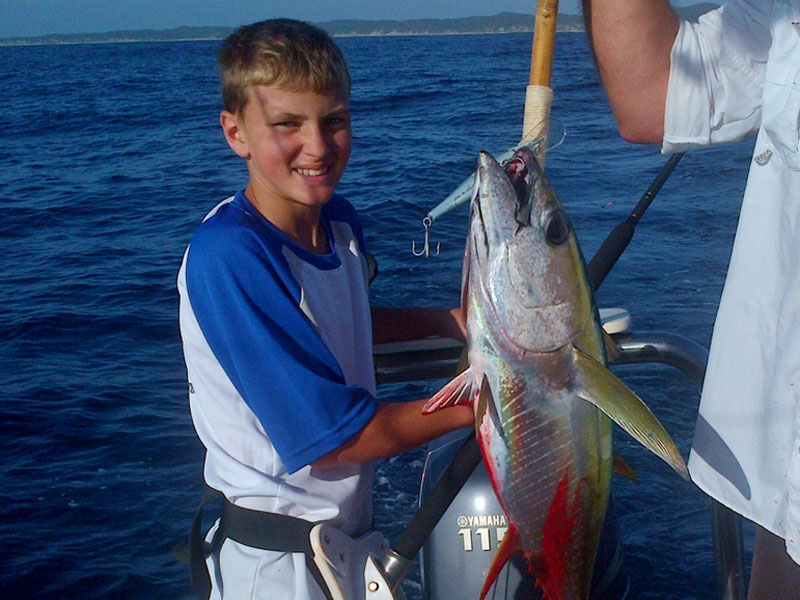 The marlin are on the bite and there were quite a few released and some bigger fish boated during the last week. Gamefish were a bit scarce but there were some dorado, yellowfin tuna, a kingfish here and there and skipjack tuna.

It was a great December and first week of January all in all. 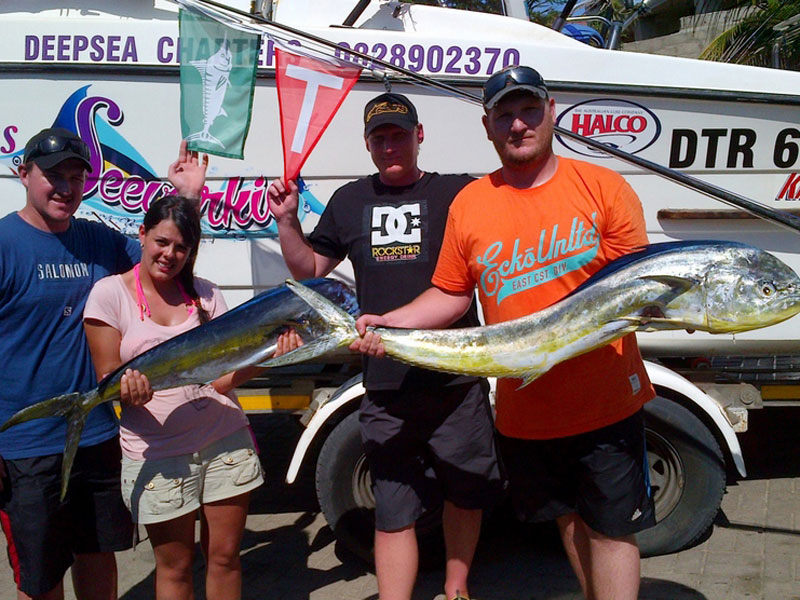 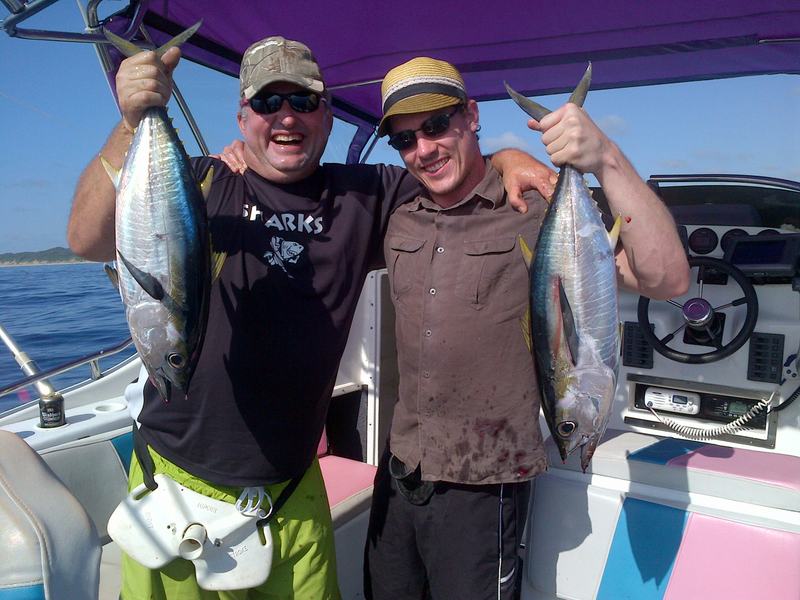 Fishing has been very good the past week, especially marlin and the sea is beautiful blue and 26 degrees. There was an abundance of striped marlin as well as a few bigger blue and big black marlin this past week. Some boats had as much as eight hook-ups with marlin in one day.

On the gamefish side there is big Kawa Kawa, skipjack tuna, yellowfin tuna, dorado and wahoo around. Johan on Seevarkie caught a green jobfish that was tagged by ORI and took pictures and released it again. 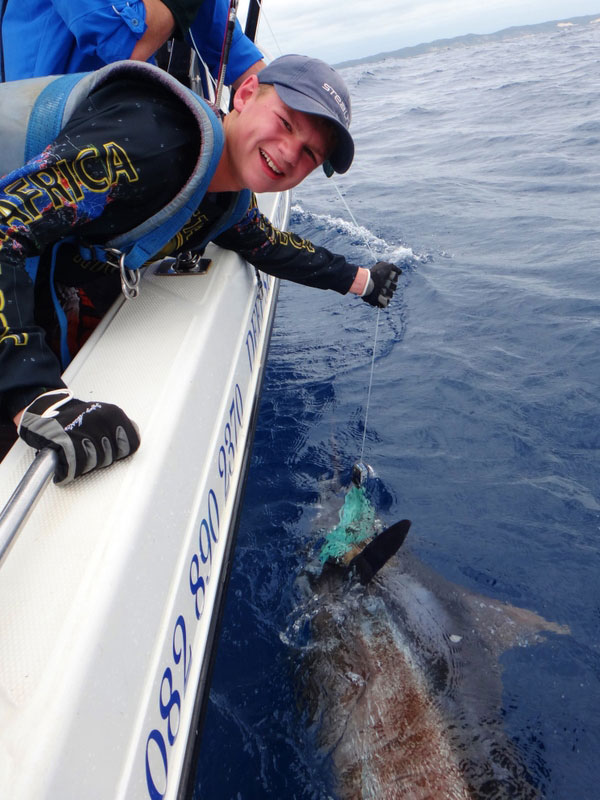 The fishing is not too bad, some days better and other days not so good but seems like there are more marlin around now, also dorado, yellowfin tuna and wahoo.

Seevarkie caught and released a very nice black marlin yesterday with a fourteen year old boy by the name of Jonty Humphries in the chair. He did a great job. Marlin was estimated at around 160kg.

On my boat we hooked up on a 15kg dorado yesterday and a 24kg yellowfin tuna today while trolling for marlin. 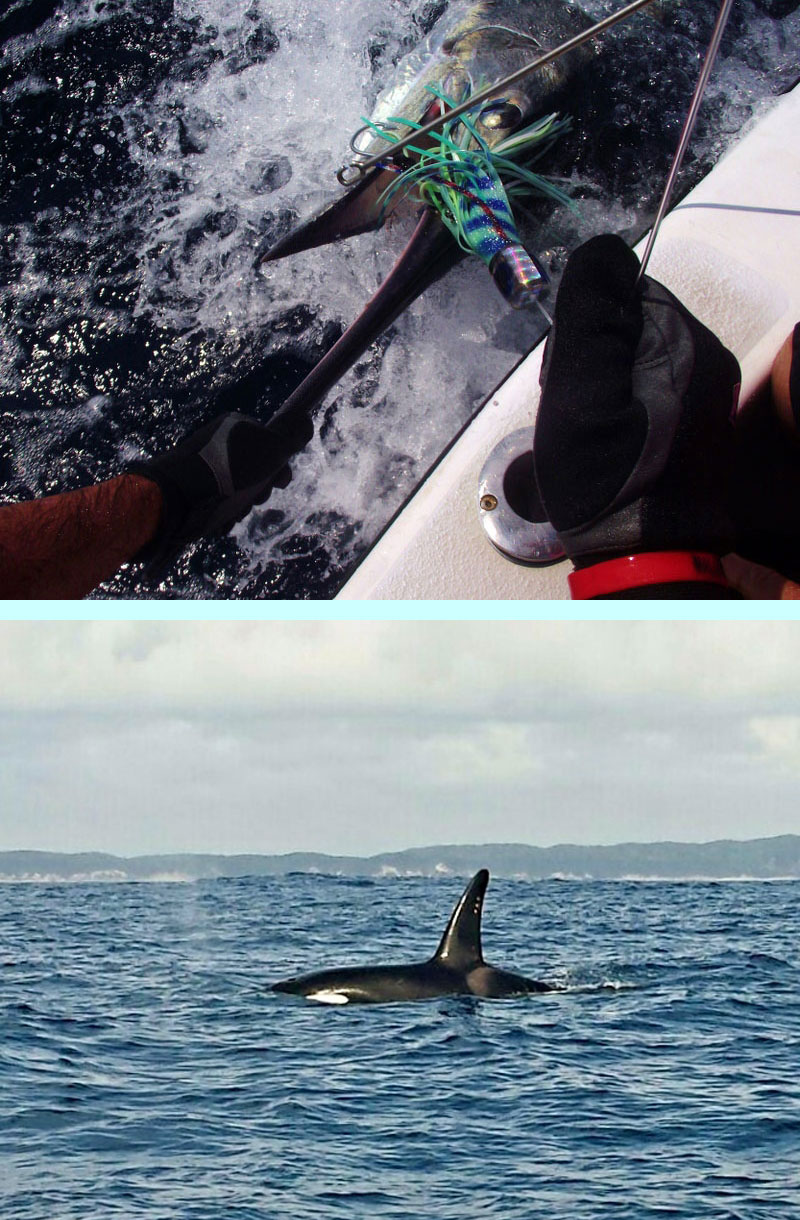 Here is the results for the OET competition this past week. Seevarkie and Mrs Seevarkie both released a black marlin on Monday but unfortunately that was where it stopped, not our turn.

We also spotted an Orca (Killer Whale) on Monday and took a nice picture of it as we were trolling next to it.

The competition was held in not that good weather and we only had two full days fishing and the other three was called off early because of strong winds and rough seas.

The biggest fish was a yellowfins tuna of 29kg’s and there was a wahoo of 21kg’s. 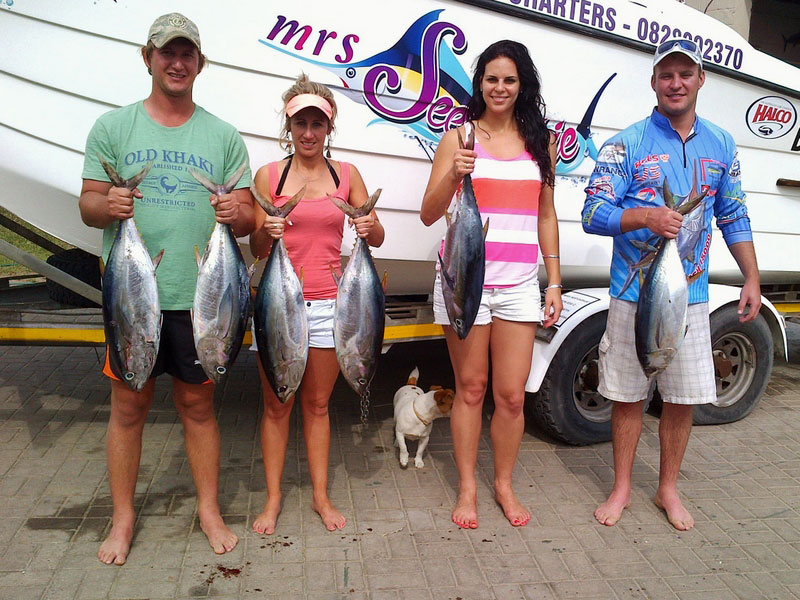 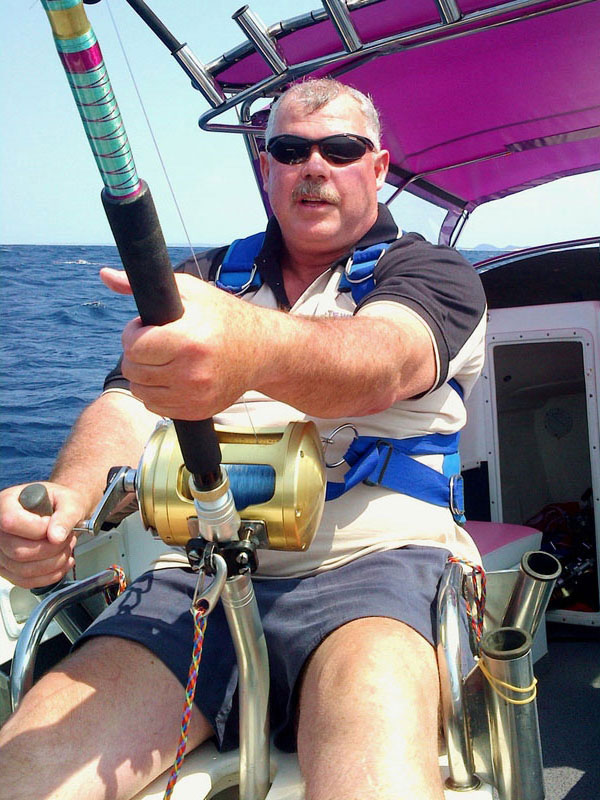 The fishing for this week was kind of great except the weather wouldn’t play along nicely but we are glad for the rain we had last night.

There were a lot of yellow-fin tuna around, mostly in the 5kg size but “Happy Days” loaded one of about 40 and one of about 25kg during the week, they also fought a big marlin on Friday but unfortunately lost it after about 2 hours, the line broke.

Seevarkie hooked up on a very nice blue marlin on Monday with angler Christie de Kock and released it after about one and a half hours fight, estimated at 270kg.

On Friday Mrs Seevarkie went out with two guys and two girls and got six yellowfin tuna and two skipjack tuna.One boat also hooked up on double sailies and manage to release one and boated one. 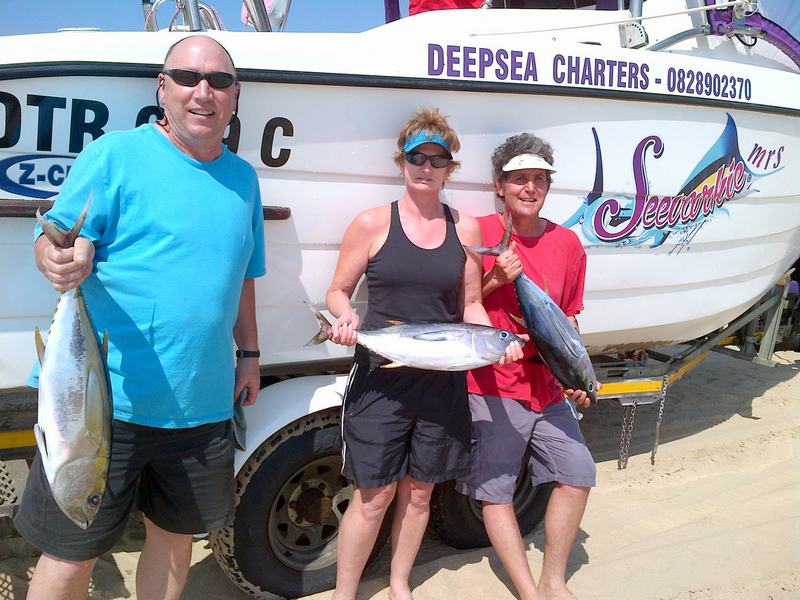 We caught a lot of yellow-fin on Tuesday, all about 4-6kg.

Went out on Wednesday with lures for marlin but without any luck.  There were some nice yellow-fin tuna on the 500m mark, they must be in the 40-60kg size but unfortunately didn’t hook up on one.